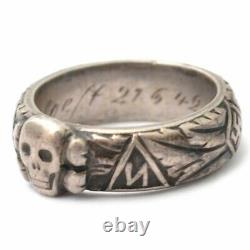 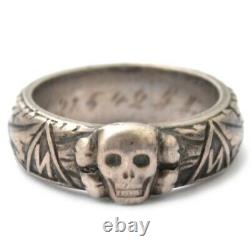 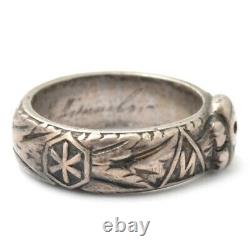 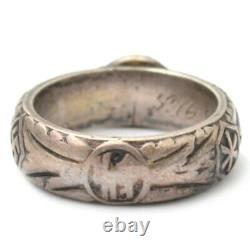 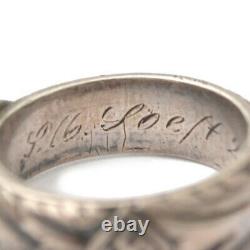 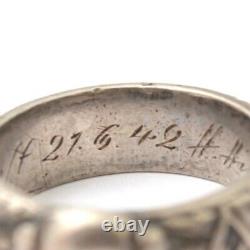 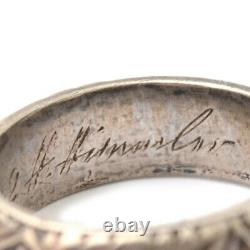 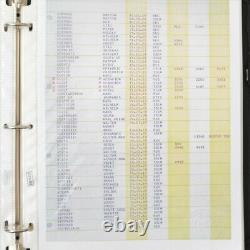 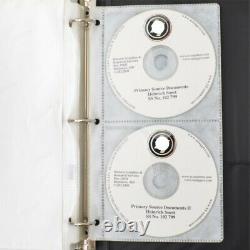 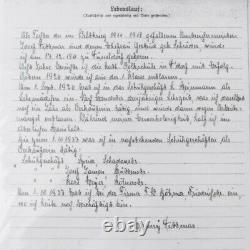 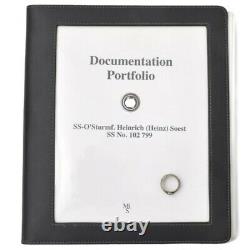 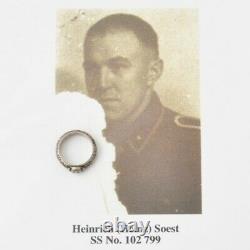 German Rare Ring Kit1842 SS Award Militaria Old Original Antique Joachim Dukart. Extremely rare example of the award of the SS in very good collectible condition. The kit also includes a folder with detailed study of the biography of the owner, and also an original page from his passport, passed along to the ring by his heirs.

Joachim Dukart was born in 1898 in Leipzig, his father was the state legal adviser to the war Ministry of Germany. I finished school in Berlin. After the outbreak of the First world war went to the front as a volunteer. He ended the war as a Lieutenant, was awarded the Iron cross 2nd class. After the war he enrolled in the higher agricultural school of Berlin, received his doctorate in agronomy. In 1923 he defended his thesis on analysis of the factors affecting cross-pollination in wheat. Was the German socialist party and a Steel helmet. In December 1931 he joined the Nazi party, the party No. In January 1933 he joined the SS, No. 1937 was the National socialist teachers' Union (NS-Lehrerbundes).

In 1934 he entered the Berlin guide Reichsnhrstand.. 1934 was appointed the chief instructor RuSHA, SS-Abschnitt XIV (headquartered in Bremen). He writes papers, conducts seminars and lectures on issues of racial policy, under the auspices of the SS and Racially-political Department of the NSDAP Rassenpolitischen Amt der NSDAP (RPA). After the defeat of Poland in 1939 Dr.

Dukart assigned to West Prussia by the representative of the Imperial Commissioner for the consolidation of the German people. Is based, from 1939 to 1942 in Gotenhafen (Gdynia). He is engaged in the, which frees up land and homes from the poles who took them after they left German citizens who fled the German lands ceded to Poland. Then brings the former owners and settles them again. For the German settlers built schools, hospitals, imported German doctors and teachers.

For them the preferential loans, distributed livestock and equipment. But Germans immigrants settled not only in their old places, they allocate the land and property of poles who left him for one reason or another. In April 1942, doctor Ducard translates into Oberabschnitt Ostland and becomes the head of the headquarters relocation. Its headquarters is located in Kaunas Donelaicio street 37.

In the Baltics it is also engaged in the displacement of the local population, the return of the Baltic Germans and their arrangement. In 1944 the situation on the Eastern front was already clear, and the doctor Dukart gets a new job to return to the Baltic Germans of the threat to the Baltic States (due to the success of the red army) to the borders of the Reich until 1939. According to contemporaries, he successfully managed more than 28,000 "Baltic Germans" were evacuated.

The highest representative of the SS and polizeifuehrer in Riga, Friedrich Jeckeln, commented on his work: there is No doubt that Dr. Dukart within its competence achieved the highest possible result. Since 1943 the doctor had worked in the RSHA, although his activities in this unit were limited to the decision regarding granting of German citizenship. After the war, up to 1949 was in American captivity.

Upon returning home he worked in the departments of agriculture in the West of Germany. Totenkopfring, SS-Ehrenring personal award sign issued personally by Heinrich Himmler to members of the SS. The original ring was awarded to senior officers of the "old guard" (there were less than 5,000 people) that has demonstrated outstanding courage and leadership in battle. But in the future the rules of the receiving ring is simplified, and by 1939, almost every SS officer who has served more than 3 years, could have such a reward. The headquarters of the SS Abschnitte (districts SS) was regularly applied to the top of the list of the winners, complemented by finger sizes.

In SS Personalhauptamt (Department of personnel SS) reviewed the lists and sent to designated rings with premium sheets. As additional conditions required a clean sheet of disciplinary action.

The production of the rings has been the company Gahr & Co. 17 October 1944 manufacture of the rings was stopped due to the difficult economic situation in the country, but nevertheless at this point, it is made 14 500 rings. The ring is made from silver plate by casting, and then it was up and it was soldered "Dead head" the skull and crossbones. A ring passed handmade jewelry processing.

In different years there were different stampings of the skull, a little differing among themselves. Worn the ring on the fourth finger of the left hand the skull to him. This rare piece was hardly acquired Please see all photos to understand its value! Please, In case of any problem or question, feel free to contact me and I will do everything I can to make you be satisfied!

After receiving the item, you should contact me within : 30 Days. In any case of problem contact me right away before leaving feedback so I will do my very best to resolve any problem, and to make you satisfied. The item "German Rare Ring Kit 1842 SS Award Militaria Old Original Antique Joachim Dukart" is in sale since Friday, February 12, 2021. This item is in the category "Jewelry & Watches\Vintage & Antique Jewelry\Fine\Art Nouveau/Art Deco 1895-1935\Rings". The seller is "biessan" and is located in Voronezh. This item can be shipped worldwide.