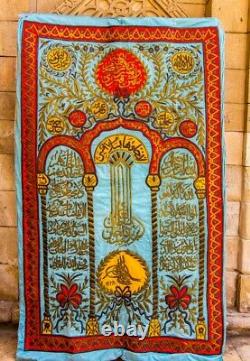 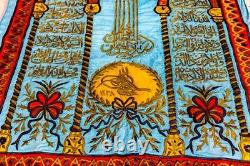 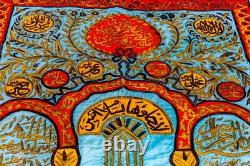 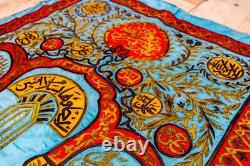 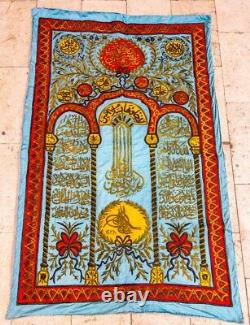 Deep turquoise-blue silk with red, green and pale-blue silk appliqués, relief-embroidered in silver and silver-gilt wire over card and cotton thread padding. Wreath at the top as being for bab al-manarah al-raisiyyah, that is the door to the main minaret at the Prophets mosque. Below this is the signature cartouche of Sultan Mahmud II, written by the Warrior for the Faith (al-Ghazi) Mahmud ibn Abd al-Hamid Khan. This signature cartouche appears often on sitarahs presented by him to the Prophets mosque. The size :- 240 x 145cm.

The large red medallion at the top of the curtain is inscribed with a prayer upon the Prophet. The hadith, ma bayna qabri wa minbari rawdah min riyad al-jannah Between my tomb and my minbar is one of the gardens of Paradise. Surat Al-Kursi is also written.

There is no god but He - the Living, The Self-subsisting, Eternal. No slumber can seize Him Nor Sleep. His are all things In the heavens and on earth.

Who is there can intercede In His presence except As he permitteth? He knoweth What (appeareth to His creatures As) Before or After or Behind them. Nor shall they encompass Aught of his knowledge Except as He willeth. His throne doth extend Over the heavens And on earth, and He feeleth No fatigue in guarding And preserving them, For He is the Most High. The item "HUGE OLD ANTIQUE ISLAMIC CAIROWARE INLAID WITH BRASS OTTOMAN CURTAIN KAABA 240cm" is in sale since Monday, May 4, 2020.

This item is in the category "Antiques\Asian Antiques\Middle East". The seller is "sulaymane-aziz" and is located in Cairo.

This item can be shipped worldwide.